From this year, the Rotterdam Business School (RBS) courses will be held in the erstwhile Zadkine College premises on the Posthumalaan. It is busy inside the building, especially near the lifts and staircases. 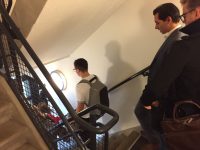 This building of nine floors  will probably be home to the RBS for the next five years. The students had to leave the building on the Kralingse Zoom when that turned out to pose a fire risk. The RBS will not be able to use the building again until the section that poses a fire hazard is demolished and rebuilt. This meant that a number of RBS students were taught in the Rotterdam World Trade Center last year and now they have all been moved to the old Zadkine building in Rotterdam-Zuid.

‘We’ve got everything we need’

‘This is our third location’, the international IBMS students (International Business and Management Studies, IBMS) Simonas (from Lithuania) and Nikola (from Bulgaria), tell us with a smile while seated on the café terrace in front of the building. Nikola: ‘We’ve got everything we need. You need to book a classroom, but at least there are computers here,  which we didn’t have in the WTC.’ There was no proper canteen there either and the two students are pleased to have one now.  They also like the café terrace. Simonas: ‘You can smoke here. I know it’s not allowed so I try to hide it a little bit. But in comparison with the pavement, it’s not windy here.

However, the two students do find the congestion near the lifts confusing. Nikola: ‘I sometimes just walk up to the eighth floor. That’s a good work-out.’

Sixteen sets of stairs to reach the seventh floor

Iris (Trade Management for Asia, TMA, third year) is not so keen. ‘I counted sixteen sets of stairs just to get to the seventh floor. On the first day, we had to queue outside just to get to the lift. It took at least five minutes.’ Like fellow student Caryona, Iris likes to get to classes on time: ‘Our classes are not compulsory, but if you turn up and turn up on time, you get bonus points for the exam.’

The Posthumalaan site has two lifts immediately inside the main entrance that go to the seventh floor. There are two more lifts on the other side of the building, but they can only be used between the sixth and ninth floors. The lower floors are occupied by the Sociale Verzakeringsbank (SVB).
Once, Caryona accidentally ended up on the ground floor by using that lift. ‘I didn’t know where I was. And I couldn’t leave the building because you need a pass.’

‘Only at certain times of the day’

The RBS is fully aware of congestion issues around the lifts, according to Communications Consultant Wietske Uneken. ‘But it’s only an issue at certain times of the day. We are currently looking for solutions to deal with this. As far as everything else is concerned, the entrances and exits meet fire regulations.’

Caryona is also unhappy about the limited number of study areas and computers. ‘I have my own laptop, but it’s broken at the moment. So I have been to the Kralingse Zoom once already.’

Apart from the small number of lifts, Lars and Romano (IBMS, second year) like the facilities, such as the class rooms and the restaurant. They compare it to the WTC. Lars: ‘It was all a bit more cramped there.’ His fellow student in the same year, Nihal, also thinks the Posthumalaan is better than the WTC. ‘There was no canteen there, it was just like a hotel. This is more like a school.’