Gerbrand van Dijk (22), fourth-year international business and languages student, is currently on a six-month student exchange in Chile. ‘Chileans are more reserved than other South Americans which makes it difficult to find common ground at times.’ 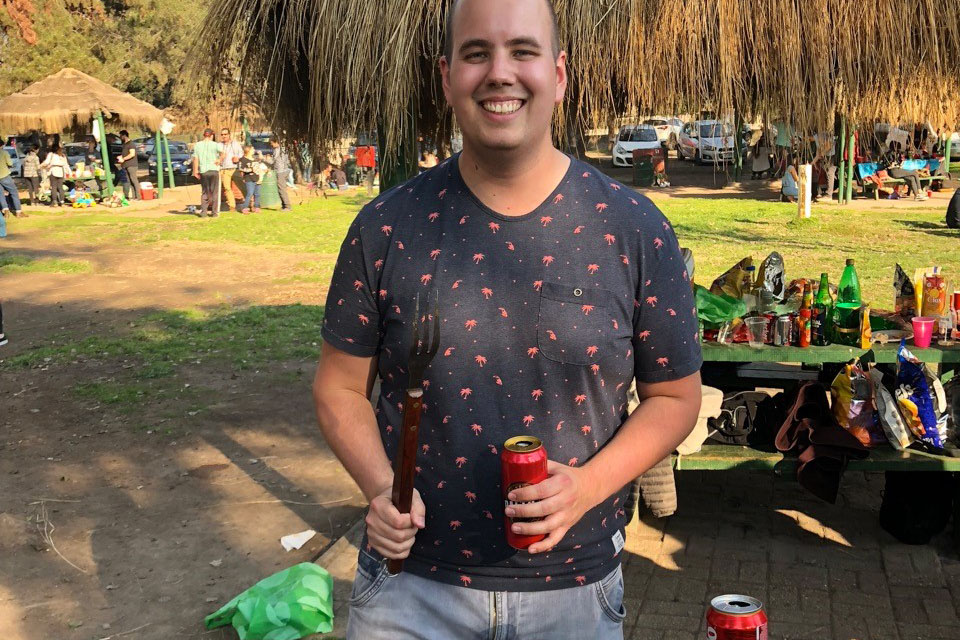 Why did you choose to study in Chile?

‘My study is primarily focused on international relations and as I had already completed an English language internship it was time to do something in French or Spanish. My Spanish is better, and I enjoy the language more, so it was an easy decision to make. Spain seemed boring. Spending six months on the other side of the world seemed more exciting. Argentina and Chile appealed to me the most. All of the placements in Argentina had already been filled, so Chile it was.’

What kind of things are you doing there?

‘I am currently in Santiago completing my seventh semester in international business in Spanish, in order to learn the language better. It is very challenging, but luckily we often work in teams and I have enough peers who don’t mind helping me here and there. I’m taking five subjects and I receive a good deal more homework than in the Netherlands. I have at least one test and one presentation each week. Last week it was two tests and three presentations.

‘I’m learning a lot about creating an efficient organisation because it is a significant issue here. Things are also more focused on interrelations, how to work together effectively, how to ensure that everyone is happy within a company. The psychological side of business management receives more attention here than in the Netherlands.’

How are your interactions with the local population?

‘Challenging, but I’m doing my best. People don’t speak English here; even the younger generation hardly speaks it. I am, of course, here to improve my Spanish. However, they speak Chilean here and that is slightly different. All of South America jokes about how difficult it is to understand Chileans.

‘I live in an Airbnb with a young Chilean couple, they are very chill. It’s a great opportunity to practice my Spanish and I teach them the occasional English word. Let’s not forget alcohol as the tried and true social facilitator. Everyone speaks a foreign language better after a drink.”

What has been the biggest source of culture shock?

‘That social classes are still so relevant. When speaking with a Chilean, you’ll be asked where you live within five minutes. Every district in Santiago holds a different reputation in terms of facilities, security and the like. They also think that all Europeans are wealthy. I am far from wealthy, but I do notice that the local population has certain preconceptions about me.’

What has surprised you the most?

‘How American everything is here. The streets seem very American, as do the vehicles. At school, the chairs are attached to the desks and the education system is also very American. From a historical perspective this is quite logical as Chile’s economy was completely reformed by economists from Chicago following Pinochet’s dictatorship. This has led to a completely different feel than that of Europe. It’s great to be able to experience this.

‘My favourite part of Chilean culture are the ‘asados’, or barbecues. They’re held often and apart from being a really good time, the food is also amazing. All of the food in Chile is great. My favourite dish is ‘lomo a lo pobre’, which, literally translated, means ‘steak for the poor’. It’s actually quite pricey, but always worth it. It comes with an immense plate of chips and a ridiculously large steak topped with fried eggs and onions. For 8,000 pesos, a little bit more than 10 euros, you’re satisfied for the rest of the day. Chile has fantastic wine as well – Chileans agree; wine is widely enjoyed.’

What do you find the most challenging?

‘The cost of living is quite high, people are somewhat reserved, and it can be challenging to form real connections. In that respect Chileans aren’t typically South American, not the typical warm Latin people. Chile is surrounded by natural borders: the Andes, the South Pole and the driest desert in the world to the North. People are quite secluded because of this, and they live in small groups.

‘It’s also surprisingly labour-focused here. It’s no surprise that Chileans have the fifth highest number of working hours per year. In the Netherlands I could get away with slacking off a little bit during a block; that is completely out of the question here.’

Would you recommend studying abroad to other students?

‘Absolutely. I think that everyone should live abroad at some point in their life. There’s so much to learn from the experience. Apart from learning another language, you come to know more about another culture, a new way of living, a completely new perspective. I’ve learned a lot about myself. As I don’t speak the language fluently, every conversation is somewhat awkward. I need to step outside of my comfort zone and I’ve really improved in that respect.’

One Response to Studying abroad: Gerbrand in Chile