Starting September, the schools of economy will combine to form Rotterdam University of Applied Sciences Business School (HRBS), but the RBS (Rotterdam Business School) will join later. The RBS is granted some time and reprieve to first focus on quality of education. 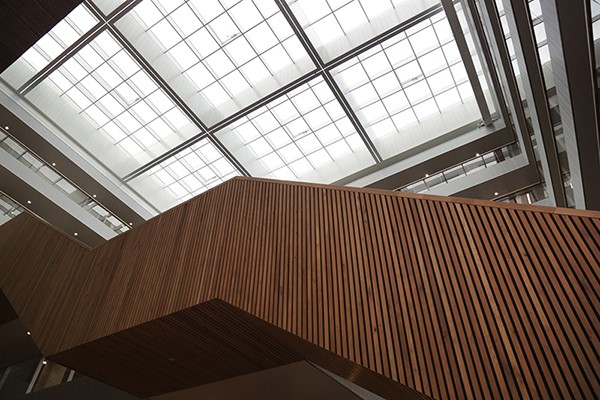 ‘We will leave out RBS for now, so their intensive reorganisation will not experience even more pressure. Just a simple matter of compartmentalisation,’ says board member Zakia Guernina, who is experienced with change and innovation in organisations thanks to her previous positions. At the university of applied sciences she supervises the merger of the current educational institutions COM, IBK, IFM, RBS and the business innovation knowledge centre.

RBS is granted time and reprieve

The Central Representative Board (CMR) already agreed to the formation of the HRBS including the delayed inclusion of the RBS. In the CMR meeting that voted on the merger, the Executive Board gave a number of reasons as to why the school is granted more time and reprieve.

‘Moreover, the management team needs time to settle,’ Guernina says. ‘Over the period of one year two interim programme managers joined and director Mira Ruiken left last autumn and was replaced with an interim director.

Guernina: ‘In terms of finances we need to take a good look at the school’s operations. Which is something I tell all schools, by the way.’

Taking a step back does not mean that RBS will not be involved in the formation of the HRBS. ‘We will certainly let them participate. They will remain involved in the steps we’re taking, as long as it does not interfere with their reprieve and their focus on the quality of education at RBS,’ Guernina says.

Like the other teachers, RBS teachers can participate in reviewing the full offer of HRBS minors. Guernina: ‘We compiled a list of all minors and are now assessing which minors we want to offer across the HRBS. There is room for new things for which we will also look for links outside of the HRBS, such as with technology, IT, healthcare, social entrepreneurship and the Willem de Kooning Academy.’

This February, a part of the new range of programmes needs to be available so students can register for them and start the minors in September 2019.

The plans did not state this explicitly, but dealing with the available space at the Kralingse Zoom efficiently also occupies the schools and the students in question. The CMR students have been arguing for opening up the project rooms and class rooms for some time and a decision has been made to meet their request.

From this week onwards, the school-specific rules regarding this matter are a thing of the past. Guernina: ‘We want to meet students’ requests, which means from now on the doors of the project rooms at the Kralingse Zoom location are open to all. This is a great example of the new work method that has become possible because the economic study programmes have joined forces.’

Not a bigger say yet for education teams at RBS

An important part of the merger that will not yet be implemented at RBS is the increased control the educational teams will have. ‘The teams need to be more agile and be able to better anticipate the constantly changing environment,’ Guernina stated earlier . In doing so, they will need to explicitly be able to handle their own support and look for cooperation outside of their current school.

Guernina: ‘I like seeing formation of new coalitions. We’ll do this, among other things, in the economy workshop. Here all teachers in the economic domain can experiment, try new things and come up with new innovations that could later contribute to education. For example, by applying design thinking.’

The HRBS is also open to student initiatives. Guernina: ‘Soon we are looking for a work method to gather, stimulate and experiment with new ideas of students.’

In the run-up to agreeing to formation of the HRBS, the Central Representative Board (CMR) highly valued the inclusion of the ‘work floor’ (students, lecturers and support staff of the merging schools).

Guernina agrees: ‘I have all faith in coordinator Fred Feuerstake and his support team to apply all sorts of formats for allowing the work floor to participate in the preparations as actively as possible. One example is the work sessions that will take place in the coming weeks that will include all support staff. Recently, I work at Kralingse Zoom one day in the week, which makes it easier for me to visit the teachers’ lounge or a class; vice versa students and lecturers can come to me.’

CMR also wants to raise awareness of the increasing work pressure among support staff in the period that the independent schools move towards the new HRBS situation. The Board took this into consideration. Guernina: ‘During the transition period it’s good to have some more meat on our bones and we will not be checking whether we’ve reached the maximum of 20 percent support (against 80 percent teaching staff, ed.) too much.’

Other role course managers and directors

A consequence of this reorganisation, which will not result in any compulsory redundancy, is that the roles of course managers and directors will slightly change. The HRBS will have a different status than the other, smaller HR schools.

In order to ensure these roles fit within the structure as well as possible, the Board requests the external recommendations of business consultancy firm. Guernina: ‘We will ask this firm to conduct evidence-based research showing how these roles are implemented at other organisations that are decentralising as well.’